The shrine of st. nectarios 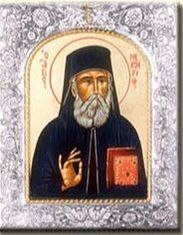 ​Saint Nectarios was born in Selybria in Thrace on October 1, 1846, and was named Anastasios Kephalas. He moved to Constantinople (Istanbul) at the age of fourteen in order to find employment and to further his education. In 1866 he went to the island of Chios where he taught school for seven years before entering a monastery as a novice. Three years later he was tonsure a monk and ordained a deacon, taking the name Nectarios. Later that year he went to Athens to complete his formal education and graduated fro the University of Athens in 1885. During his last year as the theology student, he made his first appearance as an author, and was a prolific writer of pamphlets, books and Bible commentaries thereafter.

Following his graduation, he went to Alexandria, Egypt, where he was ordained a priest and served the Church in Cairo with great distinction. In recognition of his piety and brilliance as a preacher, as well as his administrative ability, he was ordained Metropolitan of Pentapolis, an Egyptian see, in 1889, and served as Bishop in Cairo for one year before being unjustly removed from his post by jealous clerics who envied his popularity with the people. He was sent away from Egypt without a trial or explanation or an opportunity to defend himself.

Upon his dismisal, Nectarios returned to Greece where he sought employment as a preacher. In 1891 he was appointed preacher in the jurisdiction of Euboia, a large Greek island north of Athens, where he served with distinction for two and one half years. He won the admiration of his congregations and effected a real transformation in them. In 1893 he was transferred to the jurisdiction of Phthiotis and Phokis, part of the Greek mainland west of Athens. He served as preacher there with the same effectiveness as in Euboia. In 1894 he was appointed Director of the Rizarios Ecclesiastical School in Athens where he served, again with great distinction, for fifteen years. During this time, he developed many courses of study for which he wrote numerous books, all the while preaching widely throughout Athens. In 1904, at the request of several nuns, he established a monastery for them on the island of Aegina. In December 1908, at the age of sixty-two Nectarios resigned as the Director of the school and withdrew to the Holy Trinity Convent on Aegina where he lived out the rest of his life as a monk, writing and publishing and hearing confessions from those who came from far and near for his spiritual insights. While at the monastery, he also tended the monastery gardens and carried stones to help with the buildings constructed there with his own funds.

​St. Nectarios died in the evening of November 8, 1920, following hospitalization in Athens for prostatitis. His body was brought to the Holy Trinity Convent in Aegina and was buried by a priest-monk named Savvas, who later painted the first icon of the saint. The funeral was attended by multitudes of people who came from all parts of the island and from Athens and Piraeus.

Many people regarded Nectarios as a Saint during his lifetime, because of his purity of life, his virtues, the nature of his publications, his gift of foreknowledge, and the miracles he performed. The recognition of him as a Saint spread rapidly after his repose, especially after it became known that at the removal of his relics from the grave on September 2, 1953, the gave out an ineffable fragrance. Official recognition of him as a Saint, by the Ecumenical Patriarchate of Constantinople, took place on April 20, 1961.

The number of churches named after St. Nectarios far exceeds that of any others dedicated to a modern Orthodox saint. This is undoubtedly due to the enormous number of miracles which he as performed since his repose, especially since the removal of his relics in 1953, and has led to his being called "St. Nectarios the Miracle-Worker." The Athenian periodical Hagia Marina has given accounts of about two thousand miracles, listing dates, place and names and address, most of them miraculous cures, attributed to him. His holiness and number and character of his writings place him among the great educators, moralists, and religious philosophers of modern Greece, and among the holy Fathers and Teachers of the Orthodox Church.
St. George Greek Orthodox Church
818 Valley Road
​Clifton, NJ 07013